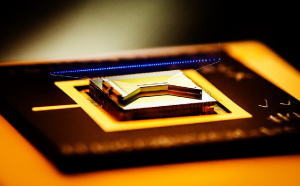 Most research in quantum computing is either purely theoretical or just explores the physics of quantum components. Not here.

Members of the Duke Quantum Center have been on the leading edge of quantum information technology for two decades, collectively attracting over $250 million in funding from government, academic and industry partners.

Our team includes scientists who demonstrated the first quantum gate in any platform, refined the approach and reduced it to practice; optical and systems engineers who have led developments that will enable quantum computer scaling; co-designers who map algorithms and simulations to our systems; pioneers of quantum error correction; and more. We have physicists, engineers, computer scientists and mathematicians collaborating to put quantum computing to work on a variety of scientific problems and real-world applications—right now. 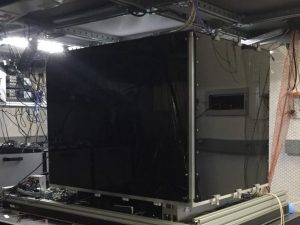 In a quantum computer, bits are replaced by quantum bits or “qubits” that can simultaneously store both states 0 and 1, when sufficiently isolated. With just 100 qubits, you could process more possibilities than there are bits in all the hard drives in the world. With 300 qubits, there are more configurations than atoms in the universe. The Duke Quantum Center is regularly working with fully programmable systems with over 25 perfectly isolated qubits. Some projects deal with many more. And we know how to scale from there.

What makes DQC unique is how we’re using that power. We have already built the first generations in an evolving line of quantum computers and simulators that will be available to users and visitors to the Duke Quantum Center. This user facility will be the centerpiece to our unique approach to quantum research. DQC represents the only “vertical” quantum computing center in the world: we assemble atomic qubits, engineer optical and electronic controllers for the qubits, and co-design quantum algorithms to the hardware, plus everything in between the quantum computer stack.

While industrial players are building quantum computers for commercial applications, at DQC we concentrate on the many known scientific directions of quantum information processing that may require more tunability and adaption of hardware to the application, and might not be of interest to industry. Along the way, DQC progress may help bridge the gap between conventional academic research and industrial quantum computer production. 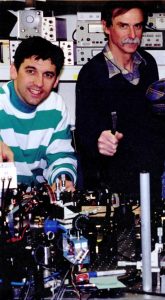 The story of the Duke Quantum Center is of longtime partners coming together.

Our origins date to 1995, when National Institute of Standards and Technology physicists Christopher Monroe and David Wineland led the demonstration of the first ever quantum logic gate, using trapped atomic ions as qubits (Wineland received the 2012 Nobel Prize in Physics partly based on this work). A few years later, this work caught the attention of Bell Labs physicist-engineers Jungsang Kim and  Richart Slusher. 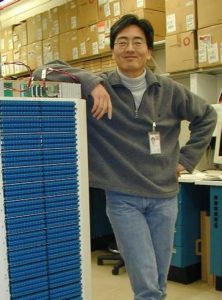 In 2004, when Kim joined Duke’s Electrical and Computer Engineering department, he proposed a semiconductor chip and optical systems approach to ion trapping, creating Duke’s first quantum information lab. Shortly after that, Kim and Monroe (then at the University of Maryland), started a collaboration that has intensified to this day. 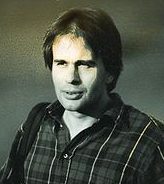 Robert Calderbank, renowned for his development of the wireless error-correcting codes we use on our cell phones, is also known for his co-invention of quantum error-correcting codes when he was at Bell Labs in the 1980s-90s. Calderbank joined Duke’s Computer Science, Mathematics, and Electrical and Computer Engineering departments in 2010. Around the same time, Ken Brown, then at Georgia Tech (along with Slusher), was pioneering quantum control and error correction approaches specifically for trapped ion architectures. 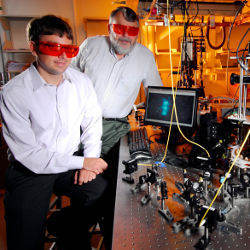 In 2010, following Monroe’s work on photonic interconnections at Michigan and Maryland, Brown, Kim, and Monroe developed a forward-looking and unique approach to a quantum computer architecture. They joined forces in large IARPA programs, MUSIQC and EURIQA, with a vision to develop a practical, scalable quantum computer. The trio has attracted over $170 million in government contracts since 2007, and in 2016 Kim and Monroe launched IonQ, a company bringing their tech to market.

In 2018, Brown joined the Duke faculty alongside theoretical physicist Iman Marvian, an expert in quantum information theory and quantum thermodynamics. Brown is also the Director of the NSF-funded STAQ program (Software-Tailored Architectures for Quantum co-design), a seven-site consortium of quantum theorists and experimentalists, including Monroe and Kim.

The same year, Monroe spearheaded efforts in Washington D.C. to launch the U.S. National Quantum Initiative, authorizing funding of more than $1.2 billion for focused research and development goals in quantum technology. The initiative is also coordinating quantum efforts in the Department of Energy, National Science Foundation, and the National Institute of Standards and Technology, along with coordination from the Department of Defense and Intelligence Community.

In 2020, all of these experts joined together at DQC, and launched the laboratory facility in 2021.